I wanted to give a voice to women and also to us, the operators. Because this house is a place where life stories intersect but it is also an unusual context as the management processes of a facility such as Casa Sidoli have specific rules.  It’s a gym where you train to live in the outside world.

How did your relationship with the homeless heroines project come about? What gave rise to the need of using art?

The first meeting about the project was at the end of 2017. I wanted to organize something that could complement the annual reports that are mainly quantitative. We are now in the eleventh year of management and the tables in the reports seemed to be too reductive to describe what actually happens in a place like this. Bored of just compiling tables, I felt the desire to describe something more, adding the voice of the people who spend important parts of their lives here to the tables. Life experiences made up of relationships, exchanges and contaminations.

How has the project evolved from your point of view? What were the points of difficulty and what were the aspects that surprised you?

Beppe Quaglia introduced me to Virginia and Irene with the idea of identifying a theme and a working methodology. We worked with the first group of women and we tried to understand with them what could be achieved, in which direction to go, what tools to use. There was the idea of using both photography and theater. The first major difficulty was, of course, the turnover of women using the service. Participation was not compulsory: we simply asked those who started the process to maintain their commitment. Some of them, however, did not feel like continuing, retracing painful moments of their past lives and talking about them in front of others. The actual journey began in 2018 when we decided to involve women who were already independent. The group consisted of eight people in total, with others added afterwards. We gradually defined the idea of making a calendar and the theme to work on: heroines. The process involved one meeting a week and was built along the way. It was the collaboration between them – the women and the artists – that allowed us to identify the heroine that each of them could represent. We started from their life stories, identifying the forces that the women had used and the qualities that each one wanted to attribute to herself.  We have worked with people who are not used to using the tool of imagination, people who live in a state of discomfort and total dependence on others. For them, identifying strengths and abilities has taken a great effort, even more so if you think that the people who use this type of Service tend to represent themselves as dependent on others: social workers, social educators and the assessments they give. It is as if their futures were always in the hands of someone else and this takes away their power, precisely the idea of empowerment with respect to their life. This attitude moves people away from self-determination, depriving themselves of self-awareness in respect to their own abilities and limiting themselves to a daily support dimension. And this self-cancellation happens because the social assistance system still works like this. We are always trying to balance the need for coexistence rules that preclude personal freedom and the need to develop autonomy. It seems like a paradox, but for some of them freedom can become explosive. Let’s remember that you almost never end up on the streets due to random living conditions: at the root, there are deficiencies, typically the absence of a solid social network. In any case, I believe that the most important part of this project, even in a light way, was the opportunity to make these women see themselves from the outside – for a moment, for a game, for fantasy – and as a reflection, receive an image of themselves that they had rarely seen and recognized.

Earlier you mentioned the relationship and contamination between people with complex lives. What did this experience give you?

I have been working with adults in difficulty since 2001. I have met so many people and I have had to strive to move away from what is called the ‘sense of omnipotence of the operators’. We are confronted with so many fragilities and difficulties that it is impossible to take charge of them all. What remains, with experiences like this but sometimes even in everyday life, is the poetry of meeting other people. It is difficult to describe, it is as if it were a unique and absolute privilege of touching those who no longer touch anyone. You come into contact with stories, and these stories are moments, looks, it’s like you’re looking for the child they used to be. Behind the fragility you meet the person. homeless heroines gave me a chance to learn a little more about these women’s lives, giving me a chance of contamination. If you go beyond the phase in which you seem to be invaded, contamination then becomes the very meaning of this work. It is a resonance. In everyday practices, the work of the social worker, the relationship work, does not have many objective tools. However, there are attempts, feelings, intuitions and the ability to question yourself so that the contact between two people can go beyond the role and activate the relationship, the trust, the mutual contamination. I leave you something about me and you leave me something about you. That’s why I wanted to give voice to the women who live here. Because this place resonates with the voices of all the women who have been here. And this, to me, is metropolitan poetry. A light poem that also leaves spaces to hide, moments when people can decide not to show parts of themselves. The main value of my work is to give back the ability to identify the best solutions to the problems they decide to bring. I try not to give advice, but to help people see things from different points of view, trying to identify a possible solution for a specific difficulty.

In this journey that was not easy, I imagine sometimes also conflicting and painful… when you read the poetic texts and leafed through the images, what did you see?

I saw the heroines! Those verses and images captured precisely the most significant and positive aspect of people. There is a kind of pride on my part in seeing that very positive side today. To some extent it is a ransom and a mark that remains here, even if submerged by all the needs, necessities and daily troubles. Art is an essential experience to always carry and practice.

Have all the 110 women who have been here had street experience? Could you give us a brief description of them?

Annalisa Merlo, Head of the Casa Sidoli Service (City of Turin), a facility that welcomes homeless adult women into a housing stability project, to be modulated according to different personal characteristics. Casa Sidoli aims to accompany guests on a journey aimed at improving their overall situation, especially with respect to homelessness, providing solutions for housing, economic and health stability. The interventions implemented are always agreed both with the person involved in the project and with the requesting Service, through periodic meetings. 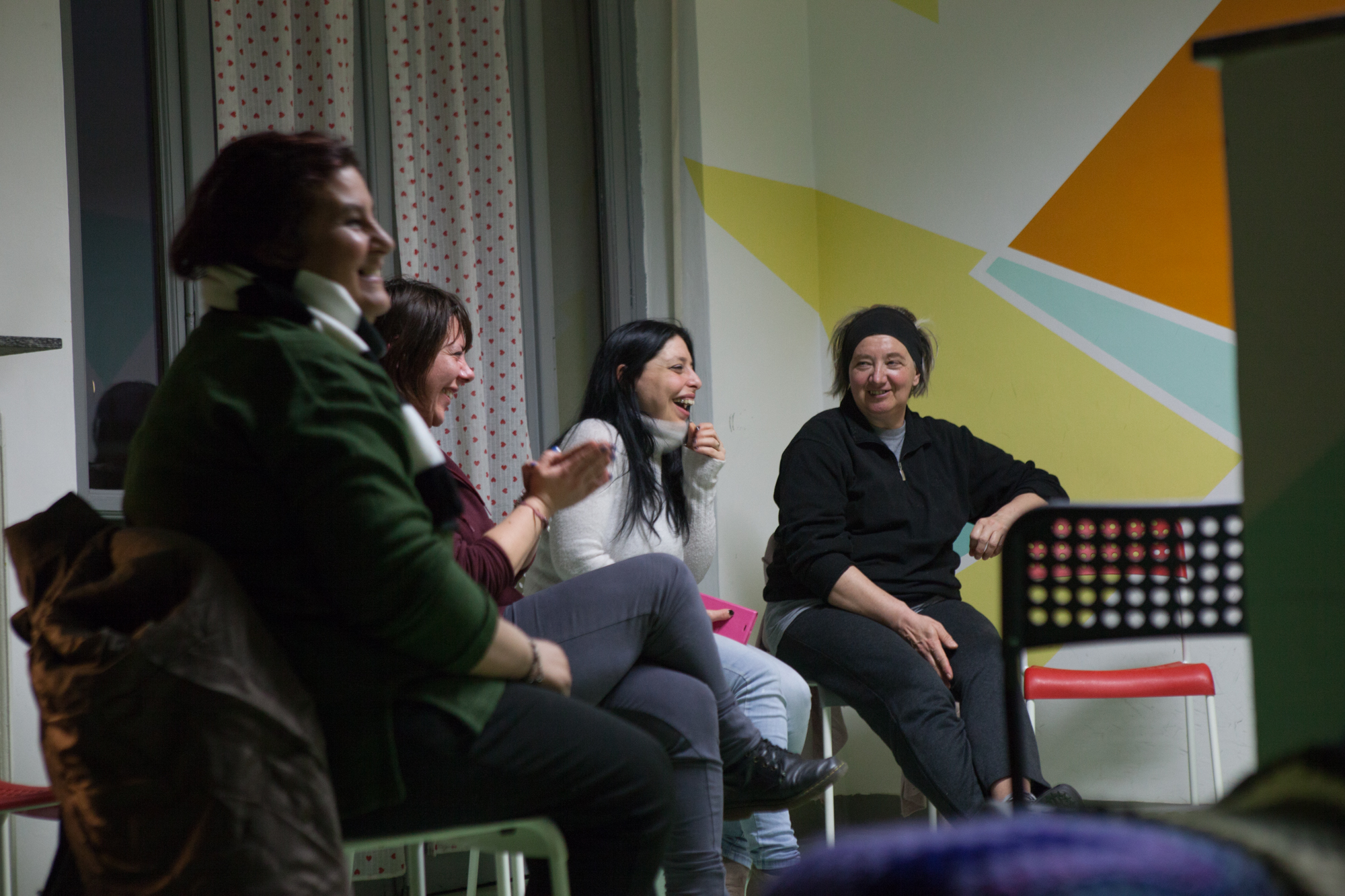